HMP Winchester approached Nu-Star regarding the daily problems they were experiencing when trying to manoeuvre their heated food trolley from the kitchens to the female wing of the prison.

The weight and size of the laden trolley, combined with the route that had to be followed from the male wing of the prison to the female wing, was causing a manual handling issue that required some sort of specific mechanical assistance in order to prevent further risks of injury.

Nu-Star designed and manufactured a bespoke attachment for their PowerTug that enabled it to precisely connect on to the chassis of the Corsair food trolley and enable a single operator to manoeuvre the load with ease. Following extended trials in early 2003, the prison facilities department purchased their first machine in June that year.

More recently, Winchester Prison has benefited from an upgrade to the kitchen facilities and an additional heated food trolley was purchased. After the continuing success of the first unit, Nu-Star were asked to supply a second PowerTug.

Corsair is an approved supplier of catering equipment to HM Prison Service and currently supplies the majority of food trolleys to establishments in England and Wales.

The PowerTug is a self-contained electric tug unit specifically designed to eliminate the manual handling risks associated with moving rolling loads with 4 swivel castors, up to 3.5 tonnes in weight. Power is provided by maintenance free gel batteries and an on-board, waterproof battery charger (ideally suited for damp conditions or where there is a risk of liquid splashing onto the machine) which enables the machine to be recharged from any available 110V or 240V power supply.

All the controls are finger operated on the hinged tiller arm and the unit is fitted with Emergency Reversing to prevent the operator becoming trapped. The digital control system is fully programmable and Nu-Star set up variables such as top speed and acceleration at the time of delivery when they also carry out full operator training and certification. 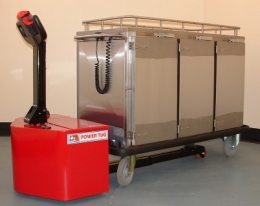