The Faurecia Poissy plant manufactures over 250,000 exhaust systems per annum for the Peugeot 1007 & 207 models & supplies them on a ‘just in time’ basis to the nearby PSA Peugeot Citroen factory.

During a 6 month trial period, Faurecia developed & modified the standard Nu-Star coupling mechanism to enable quick & easy connection to all of the exhaust trolleys on site.

Faurecia’s Laurent Tissier commented; “Following an ergonomic analysis in our site, we had to improve the way we were moving our trolleys. The best solution we have found after different trials was to use the Power Pusher. It’s very easy to use even when you do not have a lot of space. All our operators are very happy and feel better at the end of the day”

The Power Pusher is one of a range of pedestrian operated, electric tug units for moving wheeled industrial loads. The machines are manufactured by Nu-Star in Derbyshire, UK (www.nu-starmhl.com) for the EU, Middle East & Australasian markets and also in Minneapolis, USA (www.nustarinc.com) for N. & S. American & Canadian markets. 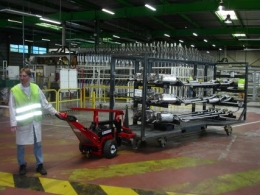 Nicola Gouyet with the Power Pusher for towing the exhaust system trolleys at Faurecia Poissy, France

Cummins Engine Company recently took delivery of their first Nu-Star Super Pusher unit at their site in Daventry, UK for moving the engine blocks during the build process.

Cummins Engine Company are one of the world’s largest designer and manufacturer of diesel engines with key markets in off-highway vehicles, industrial equipment and power generation. Cummins has manufacturing plants in 14 countries, over 23,000 employees and a global turnover of approximately $6 billion.

At their site in Daventry, Cummins manufactures high horse power diesel engines ranging from 900hp to 3000hp, for the marine, generator, construction and gas markets.

The engines are mounted on dedicated engine trolleys during the manufacturing process, and can weigh from 7,000Kg to 12,000Kg depending on the model and stage in the build process.

Mr. Eddie East (Kaizen Improvement Technician) explained; “A specific requirement within the manufacturing process, necessitated the need for a new design engine trolley and the current movers were not suitable for this new design. I had to source a new type engine mover and after intense investigation of the market, I came across the Nu-Star Super Pusher. After explaining our needs to Matt Smith, Managing Director, he visited our site and demonstrated the Super Pusher, which met and exceeded our requirements to the full. After a weeks exhaustive trial, Cummins made the decision to purchase the Super Pusher, which has been in constant use ever since. We are extremely pleased with the product, and the professional manner in which it was presented to us.” 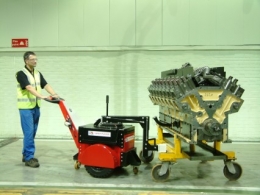