Airedale take the heat out of production with Super Pusher

Airedale International Air Conditioning has recently taken delivery of its first Nu-Star Super Pusher unit at its main facility in Leeds, UK. The Super Pusher is to be used for manoeuvring the air conditioning and chiller units through the production and testing lines and then into the despatch area.

Founded in 1974 and now employing 450 people worldwide with production facilities in South Africa and China, Airedale has become the industry leader in the research, design and manufacture of an extensive range of chillers, close control and comfort products. The 25,000 square metre production facility in Leeds is regarded as a centre of excellence for air conditioning and incorporates a cutting-edge test centre.

During the manufacturing process the air conditioning units are built up in several stages and can range in weight from 1.5 tonnes to 9 tonnes. Once assembled, the units have to be moved into and out of the test centre and finally to the despatch bay for loading with a crane.

Airedale Manufacturing Systems Engineer Tim Palmer explained: “With increased production targets and physically larger units to manufacture, it became apparent that we needed to introduce a safer and more efficient method of moving the products inside the factory. After a couple of demonstrations from Nu-Star we incorporated part of their coupling mechanism into the mobile base units on which our air conditioning units are assembled. This enabled us to use the Super Pusher like a general purpose tractor unit and manoeuvre all the units anywhere in the factory. What was a time consuming task involving four to five people is now a simple and safe operation carried out by one person. There has been an accompanying improvement in productivity.”

Airedale have subsequently taken a second unit in 2013 to further improve productivity in the plant and help move the larger units they now manufacture.

The Nu-Star product range is manufactured in Derbyshire, UK and is available throughout Europe, the Middle East, Australasia, New Zealand, Africa, Russia China either direct or, through approved Distributors. 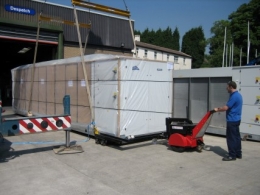